Ants generally become a problem in houses and other buildings when their nests have become disturbed after rain, or conversely, during dry weather to look for water. Poor household hygiene and pet bowls also draw them indoors. Outside conditions such as sandy areas, pavers and garden pots also are favourable conditions for ants.

If you have seen ants or ants nests, do not disturb or touch them.

Contact aventguard on for expert advice on Ant Control.

Ants are social insects which live in nests. The nests vary in size depending on their age and the species of ant. They are generally found in the ground, in wood or under rocks, although ants can also nest in walls, fireplaces, under paths and in buildings. They are most active from June to September.

Although ants are environmentally important, some can also be pests to people. Their nests and the ants themselves may be considered unsightly and they may kill or damage seeds or seedlings. Some ants bite or sting, eg. the bull ant. Ants can also cause damage to houseplants, nursery plants and crops by the cultivation of sap sucking insects such as scale and aphids. Ants use the honeydew produced by these pests as a food source and in turn protect the sucking insect from attack by predators.
Black ants are commonly found throughout the UK, and although they nest outdoors, they are often found inside. Ants range in size from 1mm to 52 mm and colours can vary; most are red or black. 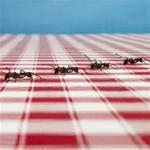 Are very dark in colour, and are usually 4mm in length. During the summer, winged females and males are reared in underground nests. Occasionally they will swarm from the nest and mate, and on returning to the ground the males soon die. The females lay their eggs and spend the winter in hibernation. In favourable conditions the queen ant and her colony may survive for several years.

Are yellow-brown in colour, and only 1.5mm - 2mm in length. Unlike black ants, swarms of pharoah ants only mate inside their nest.

Where do ants come from?

Ants may build nests on trees, though most are found in the ground, under stones or logs, inside logs, hollow stems or even acorns. You could find ants nests in dry earth around plant roots. The sand used in house foundations, garden paths and patios forms a good site for the queen ant to start a colony, as sandy soil in particular may attract colonies. Nests are increasingly being found inside the walls of properties (cavity walls, for example). Ants are social creatures, and live in colonies containing workers (infertile females), males, queens and grubs (larvae). Ants mate on the wing, so the "flying ants" are either males or immature queens. Once a colony develops it can be difficult to get rid of.

Why do ants come indoors?

The ants found indoors are usually worker ants, which are foraging for food for the queen and the grubs. They have found that buildings inhabited by humans are a good source of provision, particularly sweet or sugary items. Pharaoh ants are found where food is available. They will eat almost anything and can easily get in to unopened packages. Pharaoh ants trail each other and are attracted to greasy or fatty foods, meats, sugary foods, and other dead insects. Because of their eating habits, they can contaminate food by wandering over it.

Worker ants are scavengers and collect seeds, nectar, and even dead insects to take back to the nest. They also prey on greenfly, blackfly and other small insects, even caterpillars, so cannot be considered to be all bad.

Do ants do any harm?

Although it is unpleasant and a nuisance to find a large number of them in your home, black ants do not transmit any serious diseases. However, you should remember as well that the ants may have travelled through unpleasant or dirty places during their foraging and before entering your home. This means that they can taint any food, making it unsuitable to eat.